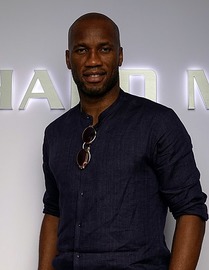 Didier Yves Drogba Tébily is an Ivorian retired professional footballer who played as a striker. He is the all-time top scorer and former captain of the Ivory Coast national team. He is best known for his career at Chelsea, for whom he has scored more goals than any other foreign player and is currently the club's fourth highest goal... Wikipedia