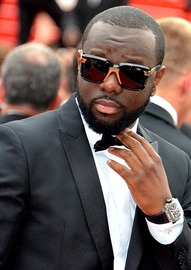 Gandhi Bilel Djuna, better known by his stage name Gims, is a Congolese singer, rapper and composer. He grew up in France and currently lives in France and Morocco. He is a former member of the hip hop group Sexion d'Assaut, and released his major label debut album, Subliminal, in 2013. The album went to sell over one million... Wikipedia