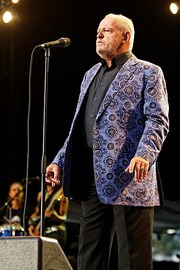 John Robert "Joe" Cocker was an English singer known for his gritty, bluesy voice and dynamic stage performances that featured expressive body movements. Most of his best known singles were covers of songs by other artists, though he composed a number of his own songs for most of his albums as well, often in conjunction with songwriting partner Chris... Wikipedia