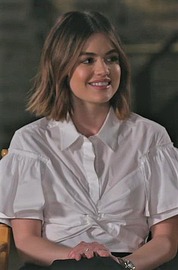 Karen Lucille Hale is an American actress, singer, and television personality, who first became known for her roles as Becca Sommers in the series Bionic Woman and Rose Baker in the series Privileged. She then had her breakthrough starring as Aria Montgomery in the Freeform series Pretty Little Liars, for which she has received several accolades. Hale starred as... Wikipedia