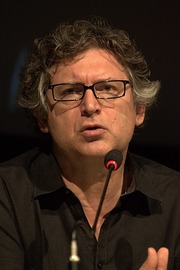 Michel Onfray is a French writer and philosopher. Having a hedonistic, epicurean, and atheist world view, he is a highly prolific author on philosophy, having written more than 100 books. His philosophy is mainly influenced by such thinkers as Nietzsche, Epicurus, the Cynic and Cyrenaic schools, as well as French materialism. He has gained notoriety for writing such works... Wikipedia